Catalyst is a substance, which increases the rate of a chemical reaction without itself undergoing any permanent chemical change. A survey of U.S. industries revealed that more than 60% of the 63 major products and 90% of the process innovations from 1930 to 1980 have involved catalysis, which illustrates the critical role of this field in the chemical industries. World catalyst demand is forecast to grow to $16.3 billion through 2022 according to the Freedonia Group. Our research is directly related to the targets set by the ‘Technology Vision 2020’ published by the Council for Chemical Research, that identified fabrication of novel and cost-effective catalysts for chemical synthesis.

Dr. Biswas’s research interests lie within the interface of inorganic and organic chemistry that involves synthesis and characterization of nanomaterials for heterogeneous catalytic applications. Catalysts are heterogeneous when they are present in a different phase (usually solid) other than the substrate in the reaction medium. Heterogeneous catalysts are more advantageous over their homogeneous counterparts due to easy separation from the reaction medium. Moreover, the stability of heterogeneous catalysts is quite notable even in extremely harsh conditions. Our interests in the field of heterogeneous catalysis encompass many of the topics of ‘Green and Sustainable Chemistry’, and projects in the lab would range from the development of useful synthetic and characterization methods for nanoscience (material and physical chemistry) to elucidation of mechanistic principles that underlie various catalytic transformations (inorganic and organic chemistry). See below for the details of the research projects, which are pursuing currently at Dr. Biswas’s lab. 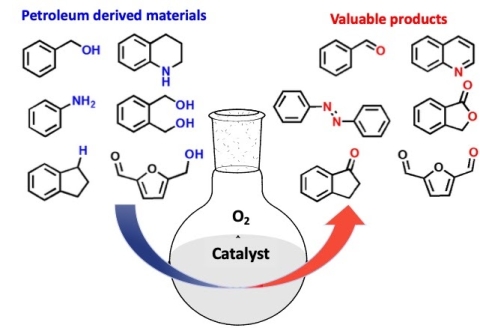 Catalytic oxidation of natural products is one of the most popular and cost-effective techniques for the production of fine chemicals. From the viewpoint of green chemistry, the design of novel methodologies for oxidation, preferably under aerobic atmospheric conditions, is highly desirable. The best catalysts in this regard are, often relying on platinum and other platinum-group metals (PGM).

Dr. Biswas from the center is currently developing a coupled-system consisting of a non-PGM heterogeneous catalyst and an electron transfer mediator, analogous to electron-transport chain in mitochondrial respiration for aerobic oxidation reactions. We are particularly interested in designing and exploring non-PGM N-doped carbon catalysts inspired from the electrocatalysts used in oxygen reduction reactions in fuel cell. We employ this coupled-catalyst system, in selective oxidation of different platform chemicals such as alcohol and glycerol. We are targeting to improve the engineering knowledge base for catalytic processes in several classes of heterogeneous oxidation reactions with applicability that may grow from specialty chemicals and pharmaceuticals to much more general use in renewable resources and energy markets.

Renewable energy resources such as wind and solar energy are constantly replenished compared to fossil fuel-based energy and serve as the future of mankind due to constant energy crisis. Fuel cells have long been viewed as a promising power source. These devices, invented in the 1830s, generate electricity directly from chemicals, such as hydrogen and oxygen, and produce only water vapor as emissions. But most fuel cells are too expensive, inefficient, or both. In a traditional fuel cell, the electrons and protons from hydrogen are transported from one electrode to another, where they combine with oxygen to produce water. This process converts chemical energy into electricity. To generate a meaningful amount of charge in a short enough amount of time, a catalyst is needed to accelerate the reactions. Right now, the best catalyst on the market is platinum which comes with a high price tag. This makes fuel cells expensive and is one reason why there are only a few thousand vehicles running on hydrogen fuel currently on U.S. roads. In the oxygen activation reactions in fuel cells, the whole game is coming up with inexpensive alternatives to platinum.

Dr. Biswas from the Center currently focuses on transition metal-based mesoporous oxide materials and nitrogen-doped carbon materials to replace platinum/palladium group of metals. The biggest advantage of these types of materials is the synthetic versatility; one can continue to modify the material properties to climb further up the mountain to achieve even better efficiency.

Collaborative projects within the Center